The Queer Art of Failure, by Jack Halberstam [Online reading] 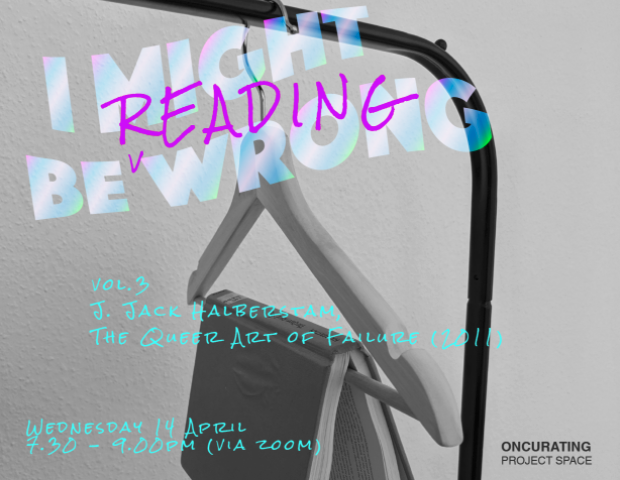 I might be [READING] wrong is back! We’ll pick it up roughly where we left it off, reading the second chapter ‘Dude, Where’s My Phallus? Forgetting, Losing, Looping’ of Halberstam’s The Queer Art of Failure. No prior reading is needed – let’s meet, read out loud, listen and discuss.

This reading group is held in English. Email us (info@oncurating-space.org) to register and receive the pdf and zoom link.

I might be wrong is an ongoing explorative series of events and conversations that tackles the topics of challenges as learning curves and experimentations. It is not about acknowledging a mistake but rather understanding it as a transformation or a ‘passage’ as Judith Halberstam suggests “[u]nder certain circumstances failing, losing, forgetting, unmaking, undoing, unbecoming, not knowing may in fact offer more creative, more cooperative, more surprising ways of being in the world.” (2011: 2).

The Queer Art of Failure is about finding alternatives – to conventional understandings of success in a heteronormative, capitalist society; to academic disciplines that confirm what is already known according to approved methods of knowing; and to cultural criticism that claims to break new ground but cleaves to conventional archives. J. Jack Halberstam proposes “low theory” as a mode of thinking and writing that operates at many different levels at once. Low theory is derived from eccentric archives. It runs the risk of not being taken seriously. It entails a willingness to fail and to lose one’s way, to pursue difficult questions about complicity, and to find counterintuitive forms of resistance. Tacking back and forth between high theory and low theory, high culture and low culture, Halberstam looks for the unexpected and subversive in popular culture, avant-garde performance, and queer art. The book pays particular attention to animated children’s films, revealing narratives filled with unexpected encounters between the childish, the transformative, and the queer. Failure sometimes offers more creative, cooperative, and surprising ways of being in the world, even as it forces us to face the dark side of life, love, and libido.

J. Jack Halberstam is Professor of Gender Studies and English at Columbia University. Halberstam is the author of seven books including: Female Masculinity (Duke UP, 1998), In A Queer Time and Place (NYU Press, 2005) and Gaga Feminism: Sex, Gender, and the End of Normal (Beacon Press, 2012). Halberstam’s latest book, out in 2020, from Duke UP is titled Wild Things: The Disorder of Desire.